Today, the fourth in a series of blog posts, the transcription the 1852 journal of Nimrod Headington, my fourth great-granduncle. [1]

Nimrod Headington (1827-1913), at the age of 24, set sail from New York in February 1852, bound for San Francisco, California, to join the gold rush and to hopefully make his fortune. The Panama Canal had not been built at that time and he sailed around the tip of South America to reach the California coast.

Nimrod Headington kept a diary of his 1852 journey and in 1905 made a hand-written copy for his daughter Thetis O. Tate. This hand-written copy was eventually passed down to Nimrod’s great-great-granddaughter, Karen (Liffring) Hill (1955-2010), who was a book editor. During the last two years of her life she transcribed Nimrod’s journal, which documents his travels between February of 1852 and spring of 1853. 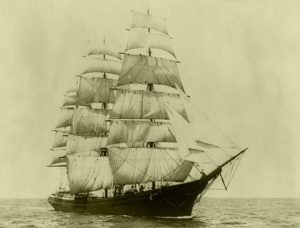 Today’s installment of Nimrod Headington’s 1852 journal, “Trip to California.” Nimrod’s diary continues with his time in Brazil, about 40 days after sailing from New York:

Sunday in Rio de Janeiro is a day of sporting, horse racing, bull fighting, etc. I went ashore with some others with the intention of going to church, but instead of seeing people going to church, then we saw all kinds of business going on. Loading and unloading ships, cart men hurrying to and from ships, and hundreds of Negroes carrying sacks of coffee on their heads from the wharf onto the ships, and all on a run.

The stores and saloons were all open. Some saloons filled with native Portuguese and some crowded with Negroes. The inhabitants of this city are a badly mixed race of people: Two-thirds of the city are Guinea Negroes black as black can be, and their dress consists of nothing more than a breech clout, no hat, no shoes. Their hide looks like the hide of an elephant. We saw one of those poor creatures cruelly whipped on one of the piers that extended out into the bay by his master, who took him by the back of the neck and his breech clout and jammed his head on the plank and stomped with his feet. Then let him up and went at him again with a piece of sugar cane about two inches thick and five feet long and split the cane into a thousand pieces over the poor fellow’s head. The Negro got up and walked away muttering something in the Portuguese language that we could not understand. I tell you it made my blood boil, but we dare not interfere, as we were in a foreign land and among strangers.

The manner of feeding those poor slaves is hardly as good as we feed hogs. We were watching the loading and unloading of a ship at the same time. The ship was loaded with shelled corn in sacks from New York and was loading to return with coffee, and the Negroes would go up one gangplank with a sack of coffee on their heads and come down another plank with a sack of shelled corn, thus loading and unloading all at the same time.

It was about the noon hour, and we wanted to see them fed presently. Four Negroes came with large buckets on their heads and sat them down on the wharf, and the working men began to gather around and stick their dirty hands into the buckets and began to eat of the horrible-looking stuff. We could not tell what it was, but it looked like wheat bran and beans about half-cooked. They ate it like it was good, but I could not think it was very palatable. Then the manner in which it was prepared and served was horrible.

The principal coin used here is a large copper coin call a Dump, worth 2-1/2 cents. The silver coin—a milreis, worth about 56 cents. These two coins do nearly all the business of the city and is the money of the realm.

I went to see the market. It was a great sight. All kinds of fruits and vegetables, such as green beans, peas, cabbage, turnips, potatoes and green corn, fowls and fishes and shrimps and all kinds of animals for sale. I saw a great many curious things, but of all that I saw to excite my curiosity, most was an old woman sitting by the wayside that had claws instead of hands and ears like a hound.

But I must now relate what happened at the office of the American consul. The captain and Mr. Abott met at the appointed hour, and after hearing what each party had to say, the consul said that another ship must be chartered and forty of our passengers should be taken off. The captain being short of funds immediately advertised for a loan of eighteen thousand milreis to pay the expense of another vessel.

The old ship Prince de Johnville was in the port undergoing repairs, and the captain made arrangements with her to carry 40 of our passengers to San Francisco. He had to pay $200 for each passenger. We left one man in the hospital. Our head steward and wife and one sailor left us, and our head cook. We remained eight days in this port, and on the morning of the 5th of April, we weighed anchor and attempted to sail out of this port, but the captain did not understand the rule of the port. We did not get out that day. This rule is that vessels leaving must obtain from the fort next to the city a
password and that password must be given at the outer fort to show that all is right, and if they have not the password, they cannot go out.

When we got opposite the last fort, the hailed us for the password. The captain did not know what they wanted and kept on. Then a blank shot was fired from the fort, and in half a minute, a shot was fired through our rigging. The anchor was dropped in quick time, and the captain lowered a life boat and went to the fort to see what was wanted. He was then informed what was required, and with four sailors to row his life boat, he went back to the first fort to get his password, and by the time he returned, the tide was setting in, and we had to hoist anchor and float back into the harbor. The next day, we attempted to run out again, but the tide set in too soon, and we could not get out. The next day, tried it again but with the same success, only we came very near running on the rocks. The office of the American consul is in plain sight of the entrance to this harbor, and with the aid of his glass could see all that was happening to us. So he sent orders to our captain not to weigh anchor again until he got a steamer to tow us out of the harbor. Only a few rods from us, we saw a Brigg run afoul of a ledge of rocks that knocked a hole in her bottom, and she sank in five minutes. A captain and two sailors were lost.

April 9th. On Friday, April the 9th early in the morning, we were towed out in fine style and soon had a fine breeze and by night out of sight of Rio de Janeiro and the main land. [2] 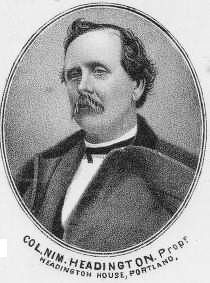