This is the twenty-first in a series, the transcription of Nimrod Headington’s 1852 journal, Trip to California.

Nimrod, with several others from Knox County, Ohio, set sail from New York on 16 February 1852, traveling on the clipper ship Racehound. After 5 months at sea, on 18 July 1852, they docked at San Francisco and shortly afterward Nimrod began his search for gold in California. 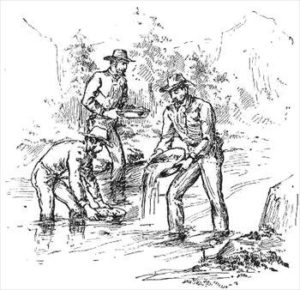 Today’s blog post begins in February 1853, as Nimrod and his partners continue their search for gold. Nimrod has been panning for gold for seven months but has not struck it big yet. Some major obstacles have been the heavy snow, the weather, and the terrain. Nimrod’s story continues:

February 24th. A party of six of us started out on a bear hunt. When we got to the dividing ridge, we divided our company 3 and 3, and a part went up to the table rock, thinking old bruin was laying up there asleep. The 3 that I was with struck out north, as we supposed we would catch the bear running away from the other three. But we were lost and did not know it until we came out at a pine grove, which was just 2 miles north of our cabins and claims. And we struck for home, and this ended our bear hunt.

February 25th. Last night the snow commenced falling again, and it snowed without ceasing for 24 hours and then cleared off again. This storm created considerable excitement among the merchants, as they had all layed in supplies of provisions at a remarkable low price. And in consequence of the storm setting in so sudden, they thought they were going to make a fortune off of the miners right off. But the weather changed to very warm all of a sudden and they felt very much disappointed.

Sunday morning came, and it was warm and pleasant. But on account of the last snow that had fallen 4 foot, there was very little stir. We were informed that there was to be preaching at the cabin of Mr. O’Brien, and we all went but Jake Hardaker. But we had been wrongly informed, and we returned home. While we were gone, Jake had prepared a fine big duff for dinner, had it smoking hot, and a nice dip made of sugar, flour, and water. And we had a royal feast on that Sabbath Day.

February 29th. Monday. We went to work and the weather was very fine and pleasant all that week. When we came to divide the dust Sunday morning, we had sixty dollars each for our week’s work.

March 7th. We were engaged in cleaning out the ditch. We worked until noon, when it commenced to snow again very hard. So we had to quit, and when we panned out, we had sixteen dollars.

At two o’clock that day, we were summoned to attend a trial. A fellow had stolen some specimens of gold and some jewelry from a Mrs. Trigaskins. A jury of miners were soon impaneled and the man was tried and found guilty and sentenced to 36 lashes on the bare back and to leave the diggings as fast as his legs would carry him. He was tied to a large tree, but they did not take off his shirt or pants. The man that done the whipping gave him 12 lashes, then stopped a minute, then gave him 18 more and stopped again, then gave him 6 more, and then turned him loose. And he was soon out of sight. He would tell no one what his name was.

This morning it commenced to rain, and it continued that day and the greater part of the next day. So we did not work but 3 days that week on account of the storms.

March 20th. Our occupation was about the same as last week and attended with very poor success. When we came to divide, we only had one hundred and five dollars for all four of us, and we had to pay 22 dollars for water. This only left us $21 apiece.

March 21st. Worked hard all day. Three of us and only got fifteen dollars and had to pay $6 for water. Worked until noon and quit. Gave up the ditch, satisfied that there was nothing in it that would pay us. And that afternoon McCafferty, Moffit, and myself went and bought out 2 men that were working a claim close to us. Their names were McKeever and Bryan, and we paid them six hundred dollars all down, and they started the next day for Australia.

The next day I went to work on one of the claims with 2 other hands, and I got $20 and fifty cents. McCafferty worked on the other claim with two hands and got twelve dollars.

Sunday, March 22nd. Rained all day and the next day, so that we had to stay in the cabin. This gave us a good chance to wash our shirts and to patch our trousers and darn our old socks. And in this way we spent the time. Flour is now worth $22 per hundred, beef 25 cents per pound. We began to fatten up a little and felt better.

Sunday, April 3rd. The day was very fine, and all nature seemed to spring forth. And [I] clap these hands at the appearance of spring, as I had been working hard all the week. I was glad to see Sunday come to rest my weary body and limbs.

Sunday, April 11th. This week we worked four days, and we got four hundred and ninety dollars. The express train came in just at night, and I hastened to the post office, thinking to hear from home and friends, but was disappointed again and came back feeling sad on account of it. But when Monday morning came and we went at our work again, dull care had soon vanished.

On Sunday, April 25th, Mr. John McCafferty was taken sick very suddenly and grew worse every hour until the following Saturday, when he died at eleven o’clock that night. The next morning Mr. Moffitt and myself procured some rough boards and, with the help of Mr. Morrison, made a rough coffin. And at 2 o’clock on Sunday, we carried the body about ¼ of a mile where some of our neighbor miners had kindly prepared a grave, where we deposited the body without any ceremonies.

Mr. McCafferty had a son-in-law Myron Bunce, who took charge of his effects and stepped into his place as a partner with Moffitt and myself.

From the first of May 1853 to the first of July, we had good weather and made use of it until the water began to give out. And we made pretty fair [wages] in that short time. [3]

Nimrod’s panning for gold was finally paying off. He mentions that his share of gold the last week in February was $60, which would be about $2000 today. Nimrod and his partners were finding gold but I wonder how much profit they really made after paying their expenses.