This will likely be the final blog post featuring items from the 5 May 1904 edition of the Willshire Herald,  William G. Hoffer, publisher. I have spent several weeks writing about Willshire news and the local businesses mentioned in that newspaper. I have pretty much exhausted most of the news from that paper. 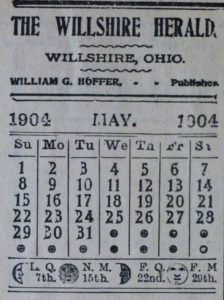 In addition to all the information about the Willshire community, the 5 May 1904 Willshire Herald had some items of interest about the neighboring village of Wren, Ohio:

The village of Wren is on the upgrade and business seems to be very active in that little burg. They have dispensed with the dram shop that had been doing business there for several years, its lease of life having expired May 1st.  [1] 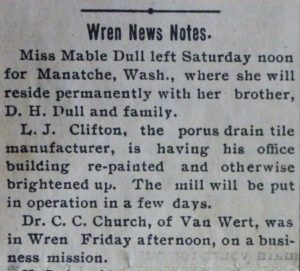 L.J. Clifton, the porus drain tile manufacturer, is having his office building repainted and otherwise brightened up. The mill will be put in operation in a few days.

Dr. C.C. Church, of Van Wert, was in Wren Friday afternoon on a business mission.

H.C. Arnold, who has been a sufferer from rheumatism for the past six months, was removed to the county farm last Saturday. Mr. Arnold is well known throughout this end of Van Wert county, and there is a general expression of regret at his unfortunate condition.

A representative of The Herald was shown through the Wren bank one day the past week by W.H. Stults, the efficient cashier of that financial institution. Scarcely a year old, yet the bank is well established and enjoys a large and meritorious patronage. The bank’s fixtures are of the latest design, the vault being fire and burglar proof, and the safe of the Mosler screw make. The stockholders comprise the wealth of Wren and adjacent country and with such men as J.L. Moser, president; L.M. Harmon, vice-president; W.H. Stults, cashier; O.J. Harmon, Dr. P.G. Havice, C.F. Germann, W.B. Frysinger, R.K. Allison, and W.H. Niblick for directors, the Bank of Wren is sure to rank with the foremost banking institutions of Van Wert county.

Wren has installed a telephone plant and starts out with something over fifty subscribers. The instruments in use are of the American Central make. The exchange will be in Art Swoveland’s place of business in the second story of the Bank of Wren block, and Art Swoveland will be the “hello girl.”

BARRED PLYMOUTH ROCKS
Eggs to hatch, from hardy, prolific and pure stock. Prices range from $1.00 to $2.50 per setting. Persons desiring to raise A-1 chickens will do well by purchasing their eggs of me. Farm located one mile south and one mile east of Wren. Call or write.  J.E. Hunter, Wren, Ohio

I believe I mentioned before that there was an ice wagon for sale in Wren: 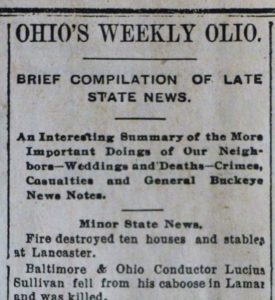 The same 1904 edition of the Willshire Herald also included some news from around the state of Ohio and it is interesting to see what was considered newsworthy at the state level in 1904:

Baltimore & Ohio Conductor Lucius Sullivan fell from his caboose in Lamar [?] and was killed.

William F. Robertson, one of Washington County’s most valuable citizens, is dead. He was born February 26, 1823.

Mistaking a can of lye for cider Charlie Lee, the 3-year-old son of Albert Lee of Napoleon, drank a cup of the corrosive. He will not recover.

Miss Lucile Ludwig of Greenspring, is totally blind in one eye, as the result of a thoughtless prank by a companion. In a spirit of fun he threw a hot potato which struck her in the eye.

Dominick Baker, aged 73, a life-long resident of Sandusky County, was drowned in Green Creek recently. He was knocked into the water by a L.E. & W. train, while crossing the bridge.

The W.H. Adams Building at East Liverpool, a brick structure, collapsed, owing to an excavation for a neighboring building. Tenants and workmen had only a minute’s warning, but all got out safely.

A.J. Ford, a structural iron worker, was instantly killed at the Wabash bridge at Mingo Junction, by a chain block falling upon him, crushing his skull. Ford was a single man and his home is at Chicago.

Thieves entered the farmhouse of Eli McBride, near Elida, in the absence of the family, securing $600 in cash, a $200 certificate of bank deposit, gold watches, and other valuables.

John Mattox, aged 28, killed himself near Darbyville. He kissed his children and stepping into another room shot himself through the temple. Domestic trouble is alleged to have been the cause.

“Uncle” Jerry Gleason, the oldest resident in Ohio, died in his home near Mt. Vernon. He was 110 years old. He was born in Tipperary County, Ireland, December 27, 1793. He took part in the War of 1812, the Mexican War, and the Civil War. Uncle Jerry was an intimate friend of President Andrew Jackson and very much resembled him. Until the last two months he was well preserved in health and intellect, and engaged in work about the farm.

During a funeral at Sevilla, fifteen miles north of Wooster, a panic occurred when the floor of the church gave way, precipitating the entire congregation into the cellar. The funeral ceremonies were be conducted over the body of Herbert Secrest, and the little church building was crowded. While the pastor was in the midst of his eulogy of the deceased the floor suddenly gave way and all present, numbering at least 200, fell to the floor of the basement, ten feet below. Many of the congregation were bruised by the fall and those in the vicinity of the casket when the floor gave way were thrown into a panic.

The remains of William Patrick, which was buried at Urbana forty years ago, were exhumed recently, at the request of his brother, Walter K. Patrick. The decedent succumbed to a contagious disease in the Northern Army during the Civil War, and as the body was brought home in an air-tight casket which was never opened, his brother wanted to make sure of the identity of the corpse. A strange sight met the gaze of the onlookers when the metallic casket was opened. Then the cloth, which had been placed over the face of the dead forty years ago was lifted, the features were just as clearly preserved as though the original burial had been made a few jays ago.  The face was natural and the identification of the brother perfect. After Mr. Patrick was satisfied that the body in that grave was that of his deceased brother, the grave was again closed up.

The large barn of Henry Trimby on the old John Morris farm in Jerome Township Union County, burned to the ground. The loss includes eight head of valuable horses, several vehicles, farm implements, and considerable hay and grain, amounting in all to $5000, with $1300 insurance.

Dr. Ignatius Friedman, a prominent physician of Cleveland, was killed as the result of a collision between his carriage and a street car.  Dr. Friedman was thrown under the car wheels and his body badly crushed. He was about 50 years old.

Most of the state news was fairly grim, but I guess pleasant news did not sell newspapers, much the same as today.

[1] A dram shop (or dramshop) is a bar, tavern or similar commercial establishment where alcoholic beverages are sold. Traditionally, it is a shop where spirits were sold by the dram, a small unit of liquid.

[2] OLIO: a miscellaneous collection of things.