Today’s blog post is the eighteenth in a series, the transcription of Nimrod Headington’s 1852 journal, Trip to California.

Nimrod, with several others from Knox County, Ohio, set sail from New York on 16 February 1852, traveling on the clipper ship Racehound. After 5 months at sea they docked at San Francisco on 18 July 1852.

In today’s blog post, Nimrod continues his search for gold in California in December of 1852. Times were hard and lean for Nimrod and his companions as they panned for gold. Would they find gold and strike it rich?

From December 24th to January 9th we were unable to work on account of the deep snow Think of men working when the snow was eleven foot deep. But on the 9th of January, we went to work in earnest, thinking that the weather had settled and that we were going to make something to buy grub with, as we were all about out of money. But we had only worked two days when it commenced to snow again, and we got three feet more snow on top of what we had, which made it almost impossible to get out at all; however, with great difficulty, we managed to get from our cabin to our claim and worked until noon. And we panned about $12.00 in gold dust, which was three dollars apiece for us.

The next day we were compelled to go for provisions. We were entirely out of flour, and when we reached the store where we expected to get flour, the store was out. But we found some cornmeal and salt pork. We paid 40 cents a pound for meal, 60 for pork, and 35 cents for beans.

Sunday morning came, and we thought it was going to be fair. It had stopped snowing. But at 12 o’clock it commenced to rain. We began to get pretty discouraged. For the weather [being] so bad we could not work, and we were out of money and almost out of provisions again. And we had no hope of a mule train coming up with provisions. It was impossible for them to get through the deep snow. We began to think that hard times had caught us sure. The nearest port where provisions could be procured was 10 miles. So we had to either pack provisions 10 miles over the snow or abandon our claims. If we left our claims, we were in danger of losing them, for the law was that if a man was not working on his claim, it was forfeited and the next man that came along could jump in and go to work and hold the claim. We talked and planned all that rainy, lonesome day what we had better do.

Monday morning it was clear again, but at 10 it commenced raining again and rained all day and all night. The next day we were called upon to assist a man in getting some mules over to the Mountain Spring House. The rain had settled down to about 8 feet. We had a funny time with the mules. We got them over Slate Creek and got part of them up the mountain on the west side and then went back to try to get the rest of them up. And just as we got back to where we left the others, we looked up and here came the mules that we had worked so hard to get up the mountain coming back. The owner was so mad that he was going to shoot the lead mule, and I begged him not to do that. And he put up his revolver, and we went to work again. And we succeeded in getting them all up the mountain except one. He got down in the snow, and we could not get him up. The man gave us $20.00 for helping him. So we had a little money again to buy provisions.

The next day we worked for a Mr. Sackett of Cleveland, Ohio, who was cutting a ditch along the side of the mountain to bring the water into the diggings where our claims were. For this day’s work we received $6 apiece, adding $24 to our money for provisions. The cutting of this ditch was just what we wanted, for our claims were not worth much unless we could get water enough to run a sluice. The next day we had to get wood and provisions, for we were out of both. Two of us went to getting wood, and two to go for provisions. We calculated to buy some potatoes and pork, as flour or meal could not be had. Inquiring the price of potatoes, we were informed that they were worth 35 cents per pound, and pork was not to be had at any price. However, we returned to our cabin again to consult with the other boys what was best to do. The conclusion was that one should go to Chandlersville, a little town that was a short distance north of us, and this journey was put upon me. And I accordingly went and succeeded in getting us 50 lbs. of potatoes at 25 cents a pound, and I was to get some pork, but there was none. I found a few pounds of lard, which I bought at 50 cents a pound and then returned home with all that I was able to pack through the deep snow.

Sunday came, and the day was very pleasant. And I spent [it] in a variety of ways: part of the time singing, and part reading, and part of the time writing in this journal and thinking of home and my little family and the year past. How soon it had slipped away. But when the thought came to the morning I left my home, it seemed like it had been 10 years. And I could not think of staying that much longer in this land of starvation, for it really seemed that starvation was staring us in the face. When it got so that there was no provisions to be bought at any price and there was but very few that had a store of provisions laid in. And those that had would not sell a pound of anything.

On the 16th of January, we commenced to work again on our claim. Worked hard all day in the water and got $16. The next morning we went to work again in good hope to make more, but when we came to clean up, we were disappointed, for we only had $8.00. This was only $2 apiece, and that would barely board us. As provision was so scarce and high, we were bound to come on an allowance. We had to make our loaves of bread of cornmeal a little smaller and then divide it equally between us. The balance of our living consisted chiefly of beans, which we had to cook without any meat or anything else to season them with, as meat had got to 40 cents per pound. I began to think this pretty hard times when we had to work all day from daylight until dark in mud and water and then go hungry. However, we were a jolly set of fellows, and as serious as it looked, we did not get discouraged. And [we] resolved to stand by one another through thick and thin as long as we could, with the hope that luck would come our way by and by. [3] 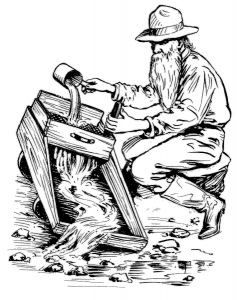