My dad, Herbert Miller, was trained as a replacement troop during the fall of 1944. In December 1944 he shipped out to Europe, to parts unknown, and was eventually assigned to Company L, 333rd Regiment, 84th Infantry Division, known as the Railsplitters. 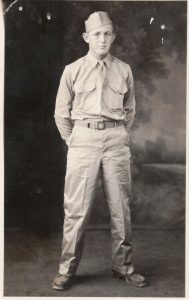 By the end of 1944 he was in Belgium fighting in the Battle of the Bulge. He fought and survived the rough terrain of the Ardennes during what was one of their very worst winters in history. 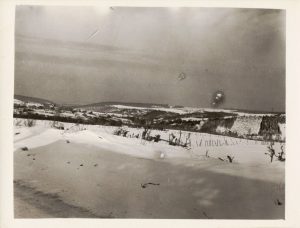 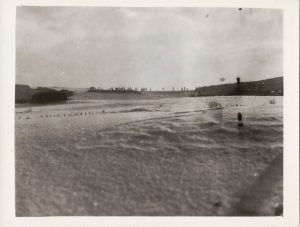 Somehow, during all of that, he managed to write some letters home. They were not permitted to disclose their location or battle details in their letters and, just to make sure of that, their letters were read and censored.

My dad apparently did not write many letters during the first couple months of 1945 and that is understandable. Fighting in the Battle of the Bulge would take most of his time and energy.

My last blog post ended with a letter written the end of January 1945. I continue his letters with a letter he wrote the end of February 1945. I added some footnotes to these letters in order to explain a few items. I have also inserted some photos my dad took during the war. He even labeled them! 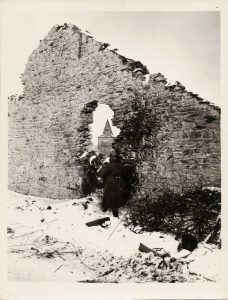 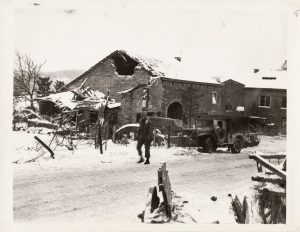 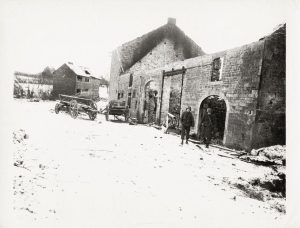 Well I finally got around to writing youins a line or two.

How is everything coming along at home? Helen still working? Say did she get the money I sent to her? I’ll send some more after pay day. Maybe in a couple of months I’ll have her all paid off.

We just had dinner and a couple of the guys got an old graph-phone [?] working so we have music. The only thing it’s German music.

I received the Valentine you sent. It sure is nice. I have it in my pocket and take a whiff if the perfume every once in a while. When I opened the envelope up all the guys smelt the perfume and wanted to know which girl it was from.

Can’t think of any more to write so I’d better close. Am feeling fine and hope that you are the same.

P.S. Please send me a box of cookies and cupcakes.

It is easy to see that the common every day things that he once took for granted back home now meant so much to him. A Valentine scented with perfume. Home-made cookies and cakes. Letters. 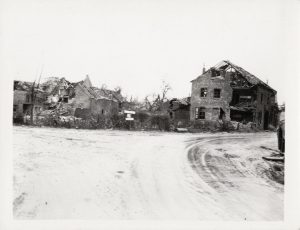 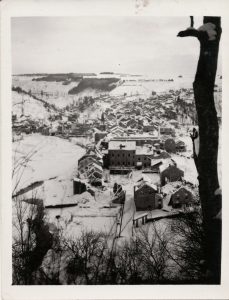 The next letter is out of chronological order, written by my dad in October 1945 and sent to his oldest sister Ruth and her husband Bob. I am including it here because in it my dad gives a timeline and description of his WWII service up to that time. The war in Europe was over by the time he wrote this letter and apparently he could now give some battle details. I posted this letter a couple years ago but it is worth re-reading.

This letter isn’t going to be very interesting, but you wanted me to tell about some of my experience. I don’t care too much to write or talk about it. I’d rather be friendly with everybody.

I went to Ft. Meade, Maryland, and from there went to Camp Miles Standish, Massachusetts, on Dec. 11. My Co. boarded the USS Wakefield-“the Old Manhattan” luxury liner. We sailed on the 12th and on the 19th we landed in England. We got on a train right away and rode across England to the channel.

On the 21st we crossed the channel and loaded ”LST” to land at Le Havre, and landed the same day. I spent that night in Le Havre. The 22nd and 23rd I spent by riding in box cars across France. On the evening of the 23rd we came to JeVaie [?], France, up along the Belgian border. That night the Jerries bombed and strafed [2] the town and it was reported that the German spearhead was only 13 miles away.

That afternoon (Christmas Day) we moved to a Repple Depple [4] just set up in the woods. There they split up the outfit into the different divisions. Some went to armored division. But most went to [an] infantry division. I went up to the 84th that evening and we came down from division to regiment. There I spent the night. On the 25th I and three of my buddies moved up to 3rd Battalion. On the 26th we were assigned to our companies. I was the only one out of the four of us that went to “L” Company.

I joined the Company at Hotton, Belgium. They just came back out of Verdenne and were on a rest. We were shelled every night. Then on New Year’s Eve the order came down for us to dig in around the town. They thought the Jerries were going to attack and we were to be secondary defense. All night there were tracers and shells coming everywhere.

The next evening we moved out and they told us we were going to go into the offensive instead of defensive. So we moved into a town that the second armored had taken a couple of hours before. We were the front lines and no one was in front of us except Jerries. The next morning we were shelled for about an hour and there was a counter-attack. It didn’t last long, thanks to the second armored.

Then at 1:00 we moved out in the attack. It was a little over 7 days until we pulled back to where we could have our first warm meals, warm drinks, dry clothes, or sleep anywhere except in the fox holes. It was a barn full of hay and the best sleep I ever had. We were there 1½ days and moved up on line again. There wasn’t anybody in front of the infantry. The tanks were behind us, the engineers. The next attack lasted about 7 days. And another 2 days rest. Then the third attack lasted almost 6 days.

We then went to Holland after the Bulge was licked. We were in Holland 5 days and on a beautiful rest. We had houses to live in and hot water.

Then we started back. Some of the guys started mack [?], for a lot of us we were going for our first time into Germany. On the third of February we walked to Brachelen and relieved the 102nd  Division. We were ready and waiting to cross the Ruhr. The Germans blew the dams and flooded the valley. We moved back to high ground and waited until the 28th when the 1st Battalion 334th  crossed the Ruhr and 335th followed, then the 333rd Regiment and some days later we came to Rheinhausen, across from Essen, Dosenheim, [5] and Düsseldorf.

A couple of weeks later we crossed the Rhine in the British Bridgehead. Then we came to the Elbe. All the time from December 24 until May 12 we were under shellfire or within range every night. That stuff is really hard on your nerves.

There is a heck of a lot that I left out and I could write 1000 pages on it but it isn’t worth it.

All we could think about is that as soon as the war is over here and in Japan we’ll go home right away. If a guy knew he’d be here this long he’d have had a different feeling.

What an informative letter! With so many details. And he started out the letter by saying that it would not be very interesting! He sure was wrong about that. 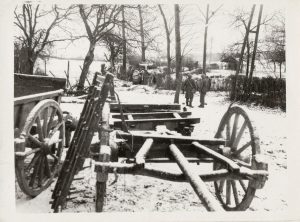 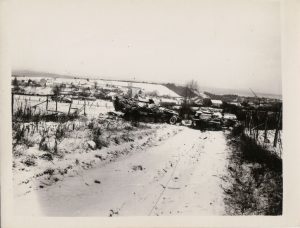 To be continued with more WWII letters.

[1] The Ninth Army was activated eight weeks before the Normandy landing in June 1944 and was one of the main U.S. Army combat commands in Northwest Europe in 1944-45. Source: Ninth United States Army, Wikipedia.

[5] Probably the village of Duisburg, Germany.