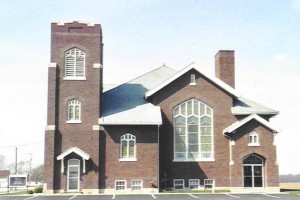 Zion was formed in 1855 as an outgrowth of the west half of St. Paul Lutheran Church, Liberty Township.  Zion’s first pastor was J.D. Gackenheimer, a traveling missionary educated in Switzerland and sent to America to serve German settlers with the Word of God.  While serving an Evangelical church in Harrison Township, Van Wert County, he would travel to the Chattanooga area to minister to the Lutheran and Evangelical settlers by baptizing the children and serving communion to the adults.

The congregation worshiped in homes until 1860, when the members purchased land to build a frame church.  The elders, Conrad Heffner and Frederick Herzog, purchased the 100×85 foot parcel of land from Jacob & Charity Deitsch in 1860 for $5.  The frame church was located immediately southwest of the present church.  For seven years the building served both the Lutheran and Evangelical worshipers, after which time the Evangelicals sold their interest and organized their own church.

In 1863 the congregation purchased three acres on the south side of Tama Road from Conrad & Margaret Heffner for $5.  A small Lutheran School was built there, run by the pastor and used during the summer for teaching the Bible.  Today the parsonage, dedicated in 1947, sits on the south end of this lot.  Two ball fields also occupy the lot and are used by local teams. 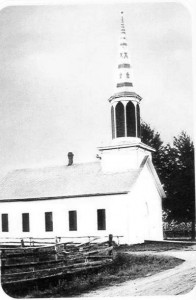 In 1889 Zion purchased 1/5 acre adjacent to the church from Michael & Elizabeth Zellinger, and in 1916 Henry C. & Margaret Baker sold an adjacent twelve by ten rods to the church for $260.  The cornerstone for the present church building was laid July 2, 1916, during the pastorate of the Rev. W.F.H. Heuer.  The present church was dedicated May 13, 1917 and the frame church was moved to the north end of Chattanooga, where it was used as a garage.

Services at Zion were held in German for more than sixty years.  The first English service was held in about 1910 and some German services were provided into the 1930s.

Zion Lutheran Cemetery is located to the east of the church, the land deeded from Michael Burger in 1866.  The oldest known tombstone is that of Agatha Heintz, who died in 1868.  She was the wife of Pastor George Heintz.  The Chattanooga Mausoleum Association purchased 100×60 feet of land immediately west of the cemetery from Henry C. and Margaret Baker in 1917.  In 1997 the parcel of land between the church and mausoleum was purchased from Gertrude Hoblet.

During the past 150 years, nearly 1100 people have been baptized at Zion and over 900 members have been confirmed.  Zion’s membership in 2004 is 187 baptized and 160 confirmed members.  Zion continues to teach the Word of God at weekly worship services and mid-week services during the Lenten season.  Active groups include Sunday School, Women of the ELCA, a Bible Study group, Luther League, Kingdom’s Kids, Zion’s Diner and Bible School in the summer.