Below are some more letters that my dad, Herbert Miller, wrote home during his Army basic training at Fort McClellan, Alabama’s IRTC [Infantry Replacement Training Center] and when he was waiting to be shipped out to Europe in WWII. After finishing his basic training he came home on furlough in November 1944. 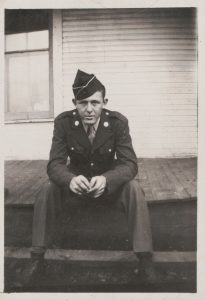 It seems that my dad wrote a lot of letters. In addition to the letters to his parents, some other relatives and his girlfriend, he wrote quite a few letters to his sister Em and her husband Norval “Jack.” My aunt Em also saved his letters and I am grateful that her family gave me those letters a couple years ago.

My dad had been home on furlough in November 1944 and by the end of November he was in Fort George Meade, Maryland, getting ready to ship out for Europe. From the letter below we learn that Em and Jack drove my dad to Lima when his furlough was over and from there he went to the east coast.

29 November 1944
Dear Em & Jack,
I haven’t got very much time to write tonight. Thought I would write you a few lines to let you know that I got here OK.

I want to thank you and Norval for taking me to Lima. You know it didn’t cost me a cent to get out here. I used my G.I. ticket for train, bus, and everything.

We received a part of our equipment—jungle [?] packs, gas masks, new liners, and steel helmets. They are using the jungle [?] packs over in Europe, too, so it doesn’t mean a thing.

I’ll probably be here a week at least. They don’t tell us anything. 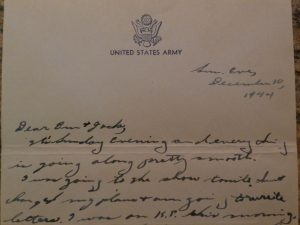 By the end of December 1944 he was in Belgium fighting in the Battle of the Bulge.

The next letter he wrote to Em and Jack is dated 31 December 1944, from Somewhere in Belgium. He was not allowed to say where.

Right now, for the rest of this blog post, I am going to backtrack a little and do some catching-up.

So today I am including some of the more interesting parts of those letters he wrote to Em and Jack during basic training.

It seems that Fred Betzel, Donald Hoblet, my dad, and some other locals were together at Fort Harrison, Indianapolis, Indiana, on 4 July 1944 for processing. They most have left Mercer County as a group and were together for at least their first seven days at Fort Harrison. At that time my dad was finished with his processing, waiting to get shipped out to his next destination.

In a letter to Em and Jack, dated 6 August 1944 from Fort McClellan, he mentions that he read in the Standard that Vincent Jolly was killed in action and was concerned about “Red” Linn, who was dating his sister Helen.

In another letter to Em and Jack, dated only “Sunday” he mentions that he wrote 8 letters since dinner and was getting tired of writing! [I don’t know how he had the time for all that letter writing along with his basic training!]

In the same letter: …The Army isn’t quite what I thought it would be but it isn’t so bad. We have ice cream every noon and iced tea or orange aid to drink. Today we got two bars of ice cream, iced tea, mashed potatoes, peas, chicken, and biscuits. So it was a good dinner.

You ought to see me with my ammunition belt on, gas mask on, steel helmet, and rifle with bayonet. If I could I would have my picture taken with the rifle. The rifle I got is a Winchester M-1, 9 shot automatic gas operated rifle. It weighs about 8 pounds….Talking about hot, it was 98 degrees in the day room and there was an electric fan in the room…

My dad absolutely loved ice cream. He told me that he acquired his love of ice cream when he was in the Army–that he wasn’t old enough to go out and drink beer with the other guys, so he ate ice cream instead.

From a letter dated 15 August 1944, from Fort McClellan: …I was sorta afraid of the M-1 rifle but really like to shoot it now. It is only practice now but I qualified for marksman. A lot of the guys are going around with black eyes and bruised cheeks where the butt of the gun hit them.

This week is going awful fast. Only twelve more weeks then my training will be over with. We got paid last Saturday night. My check was $21.58. I had a $25 bond taken out, $6.58 for insurance, and $1.50 for laundry. We signed the payroll tonight again so will get paid in 18 days…

From a letter dated 10 September 1944, from Fort McClellan: …I read in the Standard they had German prisoners working in the tomato factories. Do they have many guards watching them? There are a lot of them here. The other day I saw a truck load of German prisoners and one of them was driving the truck. They don’t have any trouble with them around here…

We have a new set of sergeants coming in. I talked to the sergeant who will be in charge of our platoon. He is really nice. Where do you think he is from? You guessed it—OHIO. He was in the Ohio 37th Division and has seen a lot of action. He said on those islands there was about one Marine to every six Infantry man. Tarawa was the worst battle up until the battle of Saipan. That was the worst so far. There is a news broadcast now. The Yanks have started in the Siegfried Line. It shouldn’t take so very long now. But I still say Japan will give up or be licked before Germany. I don’t look for the war with Germany to be over before the first of the year….

In a letter dated 11 October 1944 he mentions to Em and Jack how tough the Infantry is. He also mentioned that he heard that Don Hoblet was having a hard time of it, too. 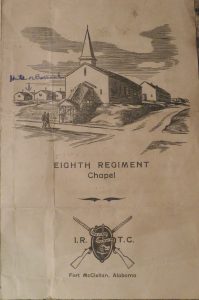 Here are a couple other items I overlooked and did not include during his basic training:

A bulletin from the Sunday worship service on 16 July 1944, at the Eighth Regiment Chapel, I.R.T.C., Fort McClellan, Alabama:

In the area of the bulletin designated “Message—use this space. Write a letter home,” my dad wrote:

16 July 1944,
Dear Mom & All,
Well had or am having today off so went to church this morning. As you will notice on the front is the picture of the 8th Regt Chapel. The I.R. T. C. means Infantry Replacement Training. I received your letters yesterday and it is about time for [?]

I got Vernie and Kenny a t-shirt apiece but forgot to get Ann anything yet. So will get Ann something tonight and mail them tomorrow evening.

We had a little practice with our rifles the other day (Saturday morning). One guy dropped his rifle. Now he has to carry the gun around and sleep with it for a week. Will close and write more on stationery. 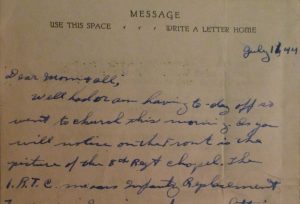 My dad wrote about a point system, a gig system, in one of his letters and the family also saved the paper that explained the system:

Effective immediately the “Six Point Gig” system will be used in area and hutment inspections. A total “Gig” of 6 points of more for any week will result in restriction to the company area for the week and, or that man may be given extra duty for three successive evenings at the discretion of the Company Commander. The following key and point values will be used in this plan.

e—Bed improperly made or arranged: 1 pt 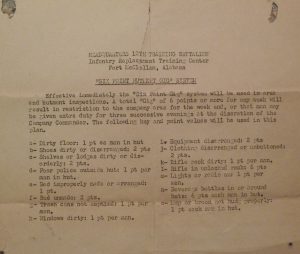 Lastly, here is a 1949 Christmas card from one of his Army buddies, Larry Broderick, of Medford, Massachusetts: 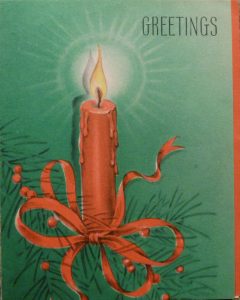 While we spend this Christmas in comfort, with our freedoms, let us remember what soldiers past and present went through and still go through for us,our country, and future generations.