I think it is interesting to learn where old churches and schools used to be located. Some of those old frame structures were even moved to other locations later. I have been tracking down the history of once such local church.

Pleasant Hill Friends Church (Quaker) once stood a few miles from where we live and the structure was moved into Rockford in the early 1900s.

I first learned about this church from Annettia (Brubaker) Smith’s 1933 obituary:

…Mrs. Philip Smith, aged 74, passed away at the home of her daughter Mrs. R.H. Lee, Rockford…Annettia, the daughter of Peter and Katherine Brubaker, was born in Liberty Township, Van Wert County, Ohio, September 2, 1858 and died January 8, 1933…In 1888 a meeting was started in the community in a log cabin and a Friends Church was organized and she became a charter member. In the following year a new meeting house was erected at what is known at the Willard Tingley farm and was named Pleasant Hill Friends Church. In the year 1906 the building was moved to Rockford and called the Rockford Friends Church of which she was a faithful member until her death, attending as long as her health permitted…Services were held in the Rockford Friends Church by Rev. O.H. Trader of the Upland, Indiana, with burial in the Riverside Cemetery… [1] 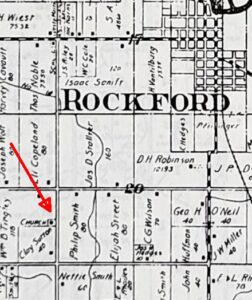 The Pleasant Hill church building was moved to Rockford and used for services there. More information about the church from a history of Quaker churches in the Van Wert County area:

Pleasant Hill Friends Church (Mercer County): Pleasant Hill Friends Church was located two miles south of Rockford. The meetinghouse was located on Wilson Road in Section 19 of Dublin Township. The congregation was known to have existed in 1896 under Friends Chapel Monthly Meeting. The congregation was “laid down” in 1906. The meetinghouse was moved into Rockford in 1906, where it served as the Friends Church. The lot was sold in 1907. An abandoned cemetery is supposed to be located at the site. [2]

Rockford Friends Church (Mercer County): Rockford Friends Church resulted from tent evangelistic services in July 1906, under Albert J. Furstenberger. A meeting for worship and a preparative meeting were set up under Friends Chapel Monthly Meeting in 1906. A meetinghouse was completed at the northeast corner of South and West Streets in Rockford in 1906 at a cost of $1500. It was dedicated on December 16, 1906. The average attendance for the meeting in 1912 was 275. Rockford Monthly Meeting was established in 1912. The meetinghouse was remodeled in 1912 at a cost of $4800. It was rededicated on November 3, 1912 by Ira C. Johnson and Thomas Brown. The monthly meeting was laid down about 1938 and the congregation closed about 1942. The meetinghouse was sold to the Calvary U.B. Church in 1944. [2]

There are 2 WPA surveys of the Friends Church in Rockford, surveys that were taken during the depression era:

One WPA survey calls the church Friends Chapel and it was located on the corner of West and Front Streets in Rockford. According to this survey Eliza Frazier organized the church in 1885 and they used a nearby log cabin schoolhouse, situated opposite its present site, as a meeting place for about 6 months. The first church, a frame building, was built in 1886 and rebuilt and made larger in 1919. The first minister was Rev. Henry Bergman, serving from 1885-1887. At the time of the survey the church was still active, with Rev. Albert Bohnert, Route 3 Rockford, as their minister. The report mentioned two members at that time, Hiram Layman and Mrs. Phillip Swanders, both having addresses as Route 3, Rockford. The building was described as a frame structure with stained windows, a high tower, 1 bell, painted, with no inscriptions. [3] This survey appears to go all the way back to when the Pleasant Hill Friends Church was formed and located south of Rockford on Now Road.

The other WPA survey calls the church Friends Church, W. Pearl Street, Rockford, established in 1904 by Rev. Bertha Day. The congregation started with about 50 members and they used a building purchased from another organization. The building was a frame structure with a tower, bell, frosted windows, with no inscriptions. Rev. William Wright, Route 3 Rockford, was the last pastor, serving from 1907-1937. The church disbanded in 1937 and they had no pastor but still held Sunday School services for everyone. The survey mentions that Phillip Swanders was the custodian. [3]

I think they are describing the same church building and basically the same congregations, although the name of the church changed. Records show that the church was later part of the Indiana group and may have technically been considered a different church. In addition, Mr. and Mrs. Phillip Swanders are both mentioned as custodians for both churches in the surveys. 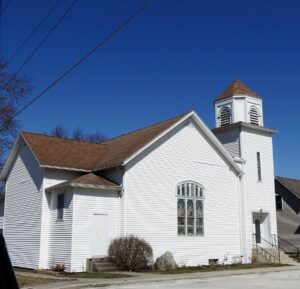 Newspaper items tell that the church building was moved to Rockford and they were holding services there by November 1906. The 16 November 1906 edition of the Rockford Press has a church notice for the Friends Church’s Sunday 18 November service: Sunday School, 9:30; Class meeting, 10:30; Evangelist Service by Pastor J.J. Furstenberger, 7:00 p.m.; Prayer Meeting Wednesday evening. Preaching at Friends Chapel 10:30 a.m. and at Liberty at 2:30 Sunday. [4]

A month later, on 16 December 1906, the Friends church was dedicated:

DEDICATION
Friends Church Will be Dedicated Sunday Afternoon- Rev. Allen Jay Will Preach Sermon
The dedication of the Friends church in Rockford, will take place Sunday afternoon at 2:30, December 16th. Great preparations have been made for this event and a large crowd of Friends will be present. Rev. Allen Jay of Richmond, Ind., will preach the Dedicating Sermon. This church has sprung rapidly into existence. Last summer a successful tent meeting was held on the site. Then and there it was resolved to build a church. Later the Quaker Church south-west of town, which had been unused for a number of years, was secured and moved to the meeting place, and set upon a good cement block foundation. A cement block tower was built, new windows put in, and other improvements made both inside and out. The result is a church that adds much to the looks to South Street. The congregation is increasing steadily and the members feel much interest in the welfare of the church. Revival meeting is going on at Friends Church with much interest. House will not hold the congregations. They believe in old time religion that makes both soul and body happy. The pastor is being assisted this week by Evangelist K.C. McCollum of Geneva, Ind., Rev. Isaiah Jay, having gone to his home for a few days. [5] The Rockford Press had a follow-up piece about the dedication a week later.

Some information from deeds:

On 22 July 1889 the Trustees of the Friends Church in Dublin Township purchased 1½ acres of land from Daniel Pifer and his wife Julia A.E. for $150. The property was located 84 rods north of the southeast corner of the southeast quarter of Section 19 and was 24 by 10 rods, the 24 rod length running north and south. [6]

On 30 August 1906, the Trustees of the Friends Chapel Monthly Meeting of the Religious Society of Friends at Rockford (Trustees were Joseph W. Dysert, William Eichar, Marion Lovee, and Warren Gale) purchased lot 19 in the Davis Addition, Rockford, from Joseph Rutledge and his wife Emma A. for $200. [7]

The frame church was probably moved to Rockford about this time and the country property was sold to farmer Tingley a couple years later.

In 1936 the church was called the Friends Church at Rockford. R.W. Wright was their pastor and R.H. Lee was their Sunday School Superintendent. [9] Mrs. R.H. Lee was the daughter of Annettia (Brubaker) Smith, as noted in Smith’s obituary at the beginning of this blog post.

On 30 October 1942 the Indiana Yearly Meeting of the Religious Society of Friends, an Indiana Corporation (property owners of the discontinued Rockford Friends Church) sold their Rockford property to the trustees of the Church of the United Brethern in Christ, Old Constitution (Trustees were Robert Lee, Joseph Purdy, D.H. Dietrich, C.B. Koeppel, and Ford Koeppel) for $1. Hiram Lehman was clerk of the Friends Chapel Monthly Meeting and Nellie Buck was their recording clerk. [10]

Rockford’s Souvenir Journal, compiled for their 1970 Sesquicentennial, also bears this out and indicates that the Church of the United Brethern in Christ’s church building, located on the corner of South and West Streets, was purchased from the Quaker (Friends) Church about 1944.

The WPA surveys are a little confusing, but I believe that they both refer to only one church that probably changed its conference affiliation in the early 1900s and changed its name. Pleasant Hill became Friends Chapel and they became part of the Indiana Conference. The church later became Friends Church.

There is still a frame church on South Street in Rockford and I assume it the same old frame church that was built in the late 1880s and moved into Rockford in 1906. I do not know if the church is still used for worship but around 2005 the church was the Victory Life Tabernacle. The building is well maintained and is currently used as an Airbnb.

I also wonder about the old cemetery that was once associated with Pleasant Hill Church. Was is abandoned or were the bodies moved?