Von Bierbach nach Chattanooga. That is the title of the newspaper story that appeared in last week’s edition of the Saarbrücker Zeitung, the “Saarbrücker Newspaper.”

“From Bierbach to Chattanooga”

And yes, the article refers to our Chattanooga, Ohio. It is the story of my immigrant ancestor after he settled in Mercer County, Ohio, in 1871. What he did, what his life was like as an American citizen, and what happened to him. 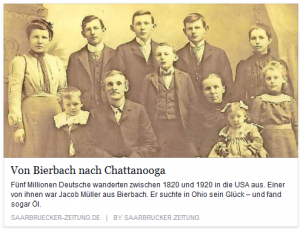 “From Bierbach to Chattanooga.” “The Bierbach emigrants Jacob Mueller (sitting) in 1900 with his large family. In 1871 he went to the USA, where he was a farmer in Ohio.”

Never in his wildest dreams could my great-grandfather Jacob Müller imagine this. That nearly a century and a half after he emigrated, someone from his native village of Bierbach would want to know about his life in the New World. Not to mention the fact that his story and family photo would be published in a German newspaper and on something as inconceivable as the Internet, where anyone in the world can read it.

How could anyone from the late 19th century imagine these things? If Jacob thought that far into the future he would have wondered: Would there be any distant relatives living in my hometown of Bierbach in 2015? Would anyone in Bierbach know of my family and the contributions we made to the community? Were our emigrant stories passed down through the years? Would anyone remember my family at all?

Thankfully there are people who are interested in knowing what happened to the German emigrants after they settled in America. They don’t necessarily have ties to a specific family. They just want to learn about and write the emigrant’s story.

Kerstin Rech is one of the people. Kerstin lives in Stuttgart and is an author who writes novels and freelances as a newspaper journalist for various newspapers and magazines. One of those newspapers is the Saarbrücker Zeitung, “Saarbrücker Newspaper” in English. Saarbrücken is the capital of the state of Saarland, located in southwestern Germany, very near the French border. It is about 12.8 miles from Bierbach, as the crow flies. Bierbach, a little village in the Kingdom of Bavaria in Jacob’s time, is now in the state of Saarland.

Kerstin has family ties to Bierbach and chose to write an article about a local 19th century emigrant. She wanted write about his life in the New World and what eventually happened to him.

Kerstin found my website, likely from an Internet search for Bierbach, and read some of my blog posts. From that she learned that my great-grandfather Jacob Müller came from her region of Germany. She contacted me over six months ago and I provided her with information about Jacob for her article.

Her story was printed in the Saarbrücker Zeitung just last weekend, in the 25/26 January 2015 edition. The article was in the Heimat/Region (Home/Region) section of the newspaper.

As I told Jacob’s story to Kerstin we discussed why he emigrated. I mentioned that many Germans were lured to America by good cheap land because there was a shortage of land in Germany.  Families were large and often only the eldest male in the family inherited the family farm. There was just not enough land for everyone in the family and remaining siblings needed some form of employment. There was opportunity in America.

When I told Kerstin that Jacob purchased 80 acres of land in Blackcreek Township she was astounded. She questioned the 80 acre number, thinking I might have made a typo and actually meant 8 acres. She said that 80 acres would have been an almost unimaginable amount of land by German standards. But I explained that it was a fairly common amount of land to purchase in this rural area. I never really thought much about it because it was an average size farm around here, but it would have been a lot of land in Germany.

By German standards Jacob would have been considered prosperous. A wealthy farmer who owned a vast amount of land.

But prosperity is relative.

Jacob was probably of average wealth compared to the other farmers in Blackcreek Township. He may have even been a little poorer than average in his community. But with a lot of hard work and determination he cleared and worked and farmed and raised livestock on his 80 acres. He built a house and barn on his farm and raised a family of ten children, losing some of those children before his death in 1918.

Jacob was not prosperous by some standards, but by other standards he was quite wealthy.

Here is a link to newspaper article, if you would like to see it yourself: http://www.saarbruecker-zeitung.de/saarland/heimat/Von-Bierbach-nach-Chattanooga;art371088,5600009

A translation of the article is below, from Google Translate. It is a rather rough translation since the German language places verbs and adjectives in a different position in a sentence than we do. They also use the hectare as their land measurement and 80 acres = 32.375 hectares.

So far, a couple people from Germany have contacted me regarding the article. Who knows where that might lead…

Now I can answer at least one of the questions Jacob might have pondered. Yes, some people from your native land and community now know your story and how well you prospered in America.

Translation of the article written by Kerstin Rech:

Five million German immigrants from 1820 to 1920 in the United States. One of them was Jacob Mueller from Bierenbach. He tried his luck in Ohio – and even found oil.

They were not good times, raged 1870. The Franco-German war. In the Bierenbacher Dorfchronik one can read that the thunder of the guns on the heights Spicherer until after Bierenbach, today part of Blieskastel, could be heard. In this year the 27-year-old day laborer and small farmer Jacob Mueller made a decision that would completely change his life.

It was not just the war and material hardship, which led him. His great-granddaughter Karen Miller-Bennett found in researching their family history, that in 1870 for Jacob himself was also a tough year. His wife, Sophia, died in childbirth. A few months later, his father John died. These setbacks prompted the young man to America, as it had already done some Bierenbacher before him. With his mother Marie and the two sisters Catherine and Margaret, who were married to the equally derived from Bierenbach brothers Jacob and Phillip Linn subject.

Not irrelevant to his decision should the letters have been that, had written of his mother’s brother, Christian Kessler. Christian was in 1849 set out in the New World. In his letters he enthusiastically reported from cheap farmland.

With few possessions climbed Jacob Mueller and his family on May 31, 1871 in Bremen, the ship called “Bremen”. 16 days took the arduous crossing. On 15 June 1871, the Bierenbacher arrived in New York.

The German emigrants at that time was the largest non-English speaking group in the United States. The “most German” settlement area was in Pennsylvania, where the location of German Town was founded in the year 1683. Further preferred by German settlers States were Maryland and New York. From the middle of the 19th century, Wisconsin, Missouri and Ohio were driven increased. Jacob and his family it moved to Chattanooga, Mercer County, Ohio, near the border with Indiana. There, his uncle Christian Kessler had already established.

1873 Jacob bought in Black Creek Township two miles north of Chattanooga for $ 1,600 about 32 acres of land. On the fertile farmland he built his farm where he lived until his death. By 1900, he also discovered five oil wells on his land. But they were not very productive. 1876 Jacob took an American citizen. A year later he married Margaretha Stroebel. The couple had two sons, Johann Peter and Christian. Margaretha died in 1882, Jacob married in the same year, a native of Württemberg Christina Rüeck.

By 1900, he changed his name Müller in Miller that made him finally to the Americans, even though he had never learned the language properly. Jacob Miller died on 15 June 1918 aged 75 years. His farm still exists today. It is now managed by his great-granddaughter Karen Miller-Bennett and her family.