I appreciate it when Karen’s Chatt readers write me with interesting information and stories about people and events in our area of west central Ohio and neighboring Indiana. I want to thank Lynne for sending me the following newspaper transcription, which she transcribed from a framed 1935 Bluffton, Indiana, newspaper, The News-Banner. I find it to be a very interesting article about a 1919 basketball game that Bruno Betzel played in, playing for Celina’s Phi Delta Kappa team, a game where Celina was shutout 138-0. A world’s record basketball shutout, at least at one time.

I do not have a copy of this news article but I found a couple smaller pieces about the game on Newspapers.com  and I have put them at the end of this post.

I have written about Chattanooga, Ohio, native Albert “Bruno” Betzel, before. He was born in Chatt in 1894 and his family moved to Celina by 1910. As an adult he was a major league baseball player and manager. He and his wife May lived in Celina and he died in 1965. 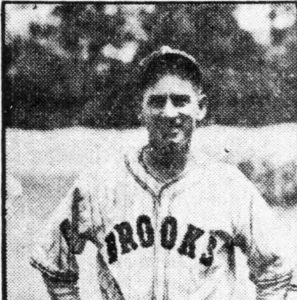 I read somewhere that Bruno played basketball in the winter to keep in shape. And that is likely why he was playing for the Celina basketball team in 1919. The article was written in 1935 and recounts the 1919 game:

Old Newspaper File Found to Verify Story About 138 to 0 Count Handed Celina Basketball Team Here in 1919–Bluffton 138; Celina, Ohio, 0.
That was the final score of a basketball game played in this city on the evening of Thursday, January 30, 1919, according to the files of the Evening Banner at the public library at this city [Bluffton, IN], and according to reports from the sports statisticians throughout the country regarding other shutout scores of record, the score turned in here still stands as the world’s record.

Verification of the score made in that game in 1919 came about through efforts of Mayor Franklin Buckner, who formerly played on the old Phi Delta Kappa team. He had heard members of the team speak of the game with Celina, O., but not until publication started of other scores reported to be world’s records, did he begin to consider it a matter of civic duty to investigate.

His desire to see Bluffton obtain credit in the matter led to his starting a search through the old newspaper files. He found that the Bluffton-Celina game was played on the night of Thursday, January 30, 1919, and was reported in the Evening Banner on January 31, 1919. The newspaper story is as follows:

A Freak Game
A freak game that will go down in basketball history of Bluffton along with one or two others of its kind was played Thursday evening between the Phi Delta Kappa team of this city and the Phi Deltas of Celina, Ohio. The score was 138 to 0 in Bluffton’s favor.

There was only one foul in the whole game.

Knowing that A. Betzel, forward on the Celina team was a shortstop on the St. Louis National baseball team and figuring that he was somewhat of an Everett Scott in athletics, Bluffton prepared for a hard game. The visiting team didn’t arrive here until late and then they put up a poor appearance with their baseball, football, and army uniforms.

Kyle got into the game for a few minutes after having been out two weeks on account of an injured arm. He caged five field goals. The summary:

Reference Explained
Everett Scott is referred to in the story for the reason he resided in Bluffton at the time he was playing shortstop for the Boston and New York American League teams and during winter months played basketball with the team here to keep in condition. He now operates bowling alleys in Fort Wayne.

Robert Cummins, who scored the record of 31 field goals, formerly played on the Freshman team at Indiana university. He is now a cashier in the Old-First National bank here.

Edwin Bolton operates a variety store Sturgis Mich., and Cletus Kyle, the other forward, is manager of an oil company in this city.

Ralph Humbert, the Bluffton center, played with the Huntington high school team before playing with the Bluffton squad. He now resides in Fort Wayne.

Earl E. (Red) Moomaw, guard, was at one time captain of the Indiana university football team. He resides in Indianapolis, where he works as a manager for an insurance company.

Ernest Shoemaker, who starred in track at Purdue, and who was another guard on the Bluffton team, also resides in Indianapolis. He is in the offices of the Indiana Service Corporation.

Victor Prough, the other player seeing duty in the game, now lives in Buffalo N.Y. He starred at one time on Bluffton high school teams.

While the record game was played over 16 years ago, all of the players who could be located here remembered it well and were able to describe it. They agreed that at the start of the game their plays started clicking and they piled up such a lead the Celina players quit trying to stop them. They reported that times in the last half of the contest some of the Celina players leaned against the gymnasium wall to rest.

While the newspaper story does not mention where the game was played, the members of the Bluffton team residing here report that it was staged at the old Cherry Street gymnasium. This is in a way verified by the newspaper files, which show that other games played by the Phi Delta Kappas that year were held there.

Remember Uniforms
All of the Bluffton players interviewed remembered vividly the uniforms worn by the Celina players. They verified the newspaper report that they wore an assortment of baseball, football, and army uniforms.

Cletus Kyle informed friends last week that he could remember playing in the game for the reason had an injured arm that had kept him out of two previous games. His recollection about his arm was stated prior to the time the newspaper article was located to verify it.

In addition to establishing an authentic world’s record for shutout scores, it is believed that the 31 field goals scored by Cummins must have come close to setting an individual scoring record.

Byrl J. Masterson, Bluffton clothier, was manager of the Bluffton team. It was largely due to his remembrance of the approximate time it was held that the story was verified. He thought the game was played in February, however, instead of in January.

Wow! That was a game Celina probably wanted to forget. I wonder if that shutout still stands as a world’s record.

There was a photo with the above article, which unfortunately I do not have:

PHOTO CAPTION: BLUFFTON PHI DELTA TEAM CLAIMED RECORD-This is the Bluffton Phi Delta Kappa basketball team that beat Celina, Ohio 138-0 on Jan 30, 1919. Back in 1935, the News-Banner assembled accounts of the game and other records elsewhere, with the claim then, as reprinted below, of a world record. Left to right are Ralph Humbert, Robert Cummins, Earl Moomaw, Victor Prough, Ernest Shoemaker, Edwin Bolton, Cletus Kyle. Team Manager was Byrl Masterson. Mrs. Marie Kyle supplied the photo above and clipping below.

However, I found a photo of the Phi Delta Kappa team, dated March 1919. This could very well be the same team photo, as the same players are lined up in the same order: [1] 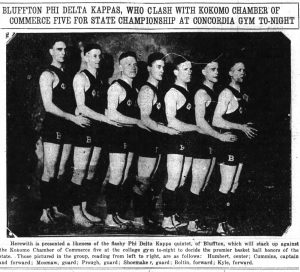 I found a very short piece about the game on Newspapers.com:

Celina Defeated
(Special to the news)
BLUFFTON, Ind., 31 Jan—Bluffton Phi Delta Kappas defeated Celina in basketball here Thursday evening 138 to 0. There was only one foul in the whole game. [2]

Here is another longer about the game, written in 1935:

Score Of 138-0 Hung Up In Bluffton Cage Game Played in 1919
Bluffton, In., Feb. 12—Local sports writers have discovered in old newspaper files an account of a basketball game played here on January 30, 1919, in which the old Bluffton Phi Delta Kappa team, an independent outfit, defeated the Phi Delta Kappa team from Celina, O., by a score of 138 to 0.

The game is believed to be a record for basketball.

The game was played at the old Cherry street gym. Robert Cummings, a star of the early days at Bluffton High School, later a forward at I.U., and at present employed in the Old First National Bank, scored thirty-one field goals, believed to be another record. Edwin Bolton, now operating a store at Sturgis, Mich., another forward on the team, scored twenty field goals.

Earl (Red) Moomaw, later and I.U. football star, was a guard on the Bluffton team. The other guard was Ernest Shoemaker, now employed in the offices of the Indiana Service Corporation at Indianapolis. Ralph Humbert, of Huntington, was the center for Bluffton. [3]

I searched for the Phi Delta Kappa basketball team on Newspapers.com and there are quite a few newspapers articles about the Bluffton team, who were the state champions in 1919. One article indicates that they had a game with the Oswego, N.Y. team, [4] so they played teams from much farther away.

Thank you so much, Lynne, for taking the time to let me know about this interesting story.