Black Creek Township was organized in 1834, although the first settlers were here prior to 1830. The township is in the northwest portion of Mercer County, bounded on the north by Van Wert County, on the east by Dublin Township, on the south by Liberty Township, and on the west by Adams County, Indiana. There are two small reservations in the northeast corner of the township, Charlie Reservation and the Labadie Reservation. There are no villages in the township. Shanesville, known today as Rockford, and Willshire, both in Ohio, and Berne, Indiana, are the nearest towns. According to an 1897 Mercer County map, there was a post office known as Black Creek Center Pond P.O., located at the intersection of Manley and Wabash Roads.

As a result of its location, some Black Creek Township churches attracted members from Van Wert County and Indiana, as well as members from Mercer County. 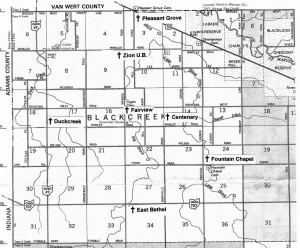 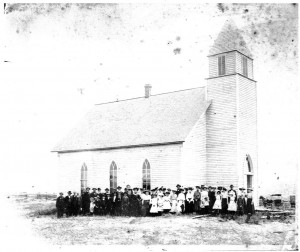 Services were conducted in the Duckcreek schoolhouse until it became too small for the congregation.  About 1868 a frame church was built across the road and north about a quarter mile, where a cemetery had already been started on a hill above the Duckcreek Ditch.  This was the first church in the township.  Land for the church was purchased from Josiah H. Wilmore in 1873 for $12.50. The oldest stone in the cemetery is that of Johnathan Emery, son of John and Sarah Emery, who died 18 August 1841.

In 1878, due to much dissatisfaction, Duckcreek left the radical United Brethren circuit and went on the Shanesville Circuit of Methodist churches.  This circuit was made up of Shanesville, Fountain Chapel, Mercer and Coss, and Willshire and Duckcreek as a Willshire Circuit. Church officers in 1879 were John Davis, Moses Foreman, D. Smith, M. Detro, H. Mille, William Beall, J. Wechter, Reed Hopkins, Baldwin Clark, and Alex Counterman. Alex and Ann Elizabeth Bolenbaugh Counterman were among the list of older members.

In 1882 Pastor M.M. Figley reported that small pox in the spring was very detrimental to the work. According to the 1891 conference notes, they were out of debt. In 1903 the officers were as follows: Trustees: G. Marbaugh, Wm. Tinkham, J. Davis, A. Bailey, S. Tinkham; Stewards: Wm. Tinkham and Eva Morrison; Class Leader: Emanuel Stetler.

Late in the evening of March 28, 1920, just after dark, the church was completely blown apart by a cyclone.  It destroyed the church building and knocked over or broke cemetery stones, but the bell came straight down and was later moved and used in the Mount Hope Church in Adams County, Indiana, four miles to the west.  Most of the Duckcreek members joined the Chattanooga Methodist Church.