As I was reading through the 1910 issues of The Celina Democrat, this article got my attention. It tells about a Woodman of the World [WOW] cemetery marker that was unveiled 31 July 1910 on the grave of Jacob Walther Smith, at North Grove Cemetery in Celina.

Chattanooga-One of the Best Towns on Earth

I hope you find these old newspaper articles as interesting as I do. Here are some more local items of interest from the 1910 Celina Democrat.

I continue to search through old issues of The Celina Democrat, looking for articles and information about our area of Mercer County. One thing I noticed is that this newspaper, during this time period, often featured articles about liquor and drinking.

Some tombstones are inscribed with an epitaph. Epitaphs are usually insightful and/or clever. They may tell something about the deceased or provide philosophical insights about life and death. 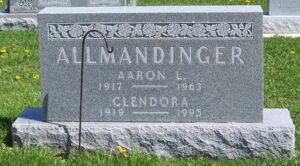 This is the tombstone of Aaron L. and Glendora (Stump) Allmandinger, located in row 5 of Zion Lutheran Cemetery, Schumm, Van Wert County, Ohio. The marker is inscribed:

Aaron Ludwig Allmandinger was born 14 April 1917 near Schumm in Van Wert County, Ohio, the son of William Carl (1867-1919) and Barbara Sophia (Hoehamer) (1877-1929) Allmandinger. Aaron was baptized at home by Rev. George Meyer on 6 May 1917 with Richard and Walter Allmandinger serving as his sponsors.

Aaron Allmandinger’s father William died in July of 1919, leaving a widow and 12 children. Aaron was only 2 years old at the time.

In 1940 Aaron was a lodger in the home of Emery Haster in Ridge Township, Van Wert County, and he worked as a farm laborer. [3]

In 1950, 9 years after their marriage, Aaron and Glendora lived in Pleasant Township, Van Wert County, with their two sons, Kenneth, 7, and Ronald, 3. [6]

Aaron Allmandinger died in Van Wert on 17 October 1963, when the car he was driving was hit by a train. The accident occurred at the Penn RR crossing at North Market Street. Aaron was 46 years old and was buried on the 20th.

Aaron Allmandinger Is Killed By Train
Aaron L. Allmandinger, 46, farmer residing five miles south of Van Wert, O., was killed Thursday afternoon when the car he was driving was struck by a three-diesel unit on the Pennsylvania railroad crossing near the courthouse in Van Wert.

The auto was carried 1,500 feet by the unit. Death was caused by a skull fracture.

Harod Saway [sic], owner of the car and an employee of Allmandinger had left the vehicle in the super shopping only minutes before the crash.

Funeral rites will be held at 2:30 p.m. Sunday at the Saint [sic] Lutheran church in Willshire township. Friends may call at the Cowan & Son funeral home in Van Wert after 7 p.m. today until 12 noon Sunday, when the body will be removed to the church. [7]

Friends may call 2 to 9 p.m. Thursday at Cowan and Son Funeral Home, Van Wert, and an hour before services Friday at the church. Memorial Contributions may be made to the Van Wert Area Visiting Nurses Association or Zion Lutheran Church. [8]

Today I am re-posting a blog I wrote several years ago, the story of the first time I heard the beautiful Christmas song Mary, Did You Know. 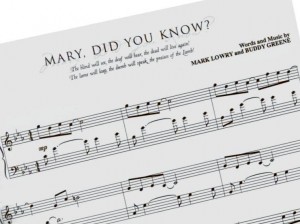 “Mary, Did You Know” by Buddy Greene & Mark Lowry.

It was in the early 1990s at a small live concert and the song was sung by Buddy Greene, one of its composers.

A friend had asked us if we would like to go to Fort Recovery to hear Buddy Greene, a Christian musician known for playing the harmonica. My friend and her husband had seen Buddy perform several times and she knew that I liked harmonica music. Our son Jeff, who was around 12 at the time, also went along, so it would have been about 1994.

I do not remember where the event was held, only that it was at a church in Fort Recovery. Chairs were set up in their fellowship hall and a small group had gathered that Friday night to hear some Christian music played on the harmonica. We had seats in the first or second row and we even got to meet Buddy Greene after the show.

Buddy Greene is quite talented and is a very good entertainer. In addition to the harmonica, he played his guitar, sang, and talked. He had several harmonicas and played them like I had never heard a harmonica played before.

He played traditional harmonica numbers, such as Orange Blossom Special, as well as hymns, Gospel songs, and even a few classical pieces. I never thought of Bach’s Jesu, Joy of Man’s Desiring as a harmonica number, but Buddy played it beautifully on his harmonica.

Toward the end of the evening he sang Mary, Did You Know, a song that he helped compose. That was the first time we had ever heard the song and it immediately became one of our favorite Christmas songs. Buddy explained that his friend Mark Lowry wrote the lyrics and asked him to compose the melody.

What a wonderful piece of music that has become a favorite Christmas song for many. I still get chills every time I hear it because the lyrics are so profound and meaningful.

The lyrics were written in 1984 and Buddy composed the music sometime after. Mary, Did You Know was first recorded by Michael English in 1992 and has since been sung and recorded by many others.

We got to hear it when it was a relatively new song and were privileged to hear it performed live by one of its composers.

Most recently, we saw bluegrass performer Rhonda Vincent and her band the Rage twice and she sang Mary, Did You Know at both concerts. They dressed up for their version of the Nativity during their Christmas concert. 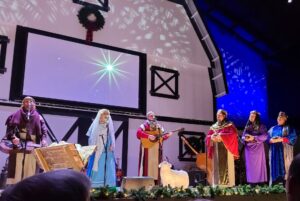 Rhonda sang Mary, Did You Know beautifully and accompanied herself on her acoustic guitar. You could have heard a pin drop when she sang it. 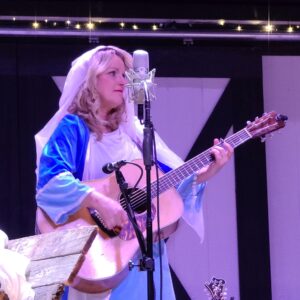 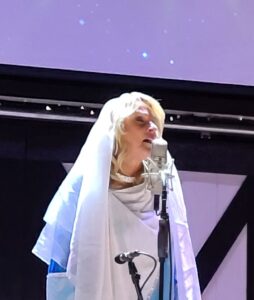 We took a little vacation to Holmes County a couple weeks ago. The weather was pretty nice for December and while there we took the time to visit one of my favorite cemeteries, West Lawn Cemetery, in Baltic, Tuscarawas County. Some of my Scaer/Scarr ancestors lived in that area in the late 1800s before moving to Allen County, Indiana. In fact, my great-grandfather John Scaer was born in Baltic in 1865. 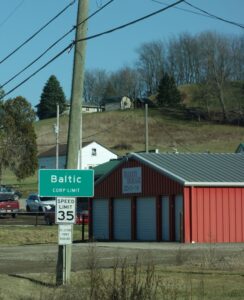 West Lawn Cemetery is on the west edge of Baltic and is located on a hill. 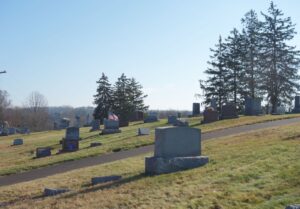 We usually visit this cemetery when we are in the Holmes County area, along with a stop at one of our favorite wineries, the Baltic Mill Winery, located in a beautiful old mill in town. 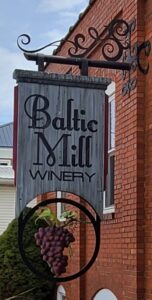 It was a nice sunny day when we were at the cemetery and on this visit we explored the new section.

I noticed this saying, inscribed on the Baab tombstone. 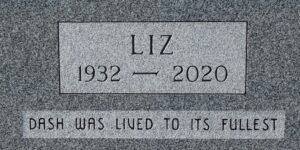 DASH WAS LIVED TO ITS FULLEST

It took me a few seconds to understand its meaning.

Can you figure out the meaning?

On many tombstones, and in genealogy in general, the vital statistics of a person’s life are reduced to two dates, their birth date and their death date, with a dash between the two dates.

The birth and death years are important but there is so much more to someone’s life.

For most people, most of their lifetime is what happens during the time period represented by the dash. The period of time between the two dates.

The dash is your life.

We should all make the most of our dash.

Sending Christmas greeting cards has been a tradition since the 1840s and Christmas postcards were certainly popular in this area in the early 1900s.

This is another Christmas postcard, postmarked Willshire, Ohio, December 23, 1909. It is addressed to Mrs. Effie Morrison, Willshire, O. 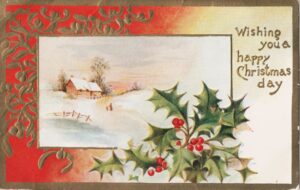 I wish you all a Merry Xmas and a happy New Year. Lillie R.

The message is short and sweet. 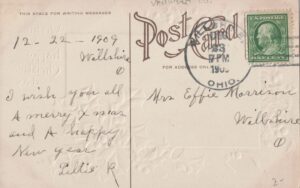 I don’t know who Lillie R. was but there were two Effie Morrisons living in the area, both living in Black Creek Township, Mercer County.

I suspect this postcard was sent to Effie R. since they probably had a Willshire address.

Lighthouses have stood on coastlines for centuries, warning and guiding sailors to a safe passage.

A lighthouse image inscribed on a tombstone can have several meanings. 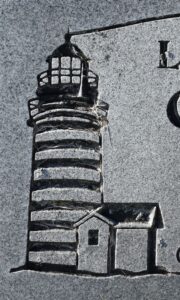 Lighthouses symbolize strength. Most stand on the edge of cliffs and rocks, standing strong against the storms and rough sea waves.

Lighthouses symbolize vigilance. The lighthouse keeper is reliable, always on duty at the lighthouse, keeping watch 24 hours a day, every day of the year, guiding sailors.

A lighthouse is a source of hope and can be a lifesaver. Its beacon of light guides people to a safe haven, especially those lost at sea and ships seeking safe harbor. Lighthouses are erected in locations where there would likely be death without them. Built near dangerous rocks, hidden sandbars, and strong currents, they give hope for safe passage.

Lighthouses are a guiding light and an important navigation tool, guiding sailors safely to shore. They symbolize the hope and faith in Jesus as the Guiding Light. In addition, the Guiding Light Principle encourages people to follow a moral and right path.