The Knights of Pythias was officially founded in Washington DC in 1864 by Justus Rathbone, founded as a secret fraternal society for government clerks.

Mercer County, Ohio’s 1850 Mortality Schedule is rather interesting. Not just because it has information about individuals in the county who died sometime during the 12 months prior to the 1850 census day, 1 June 1850, but because one of the enumerators wrote remarks in the Remarks section at the bottom of the pages. Reading remarks on an old document is usually pretty interesting. 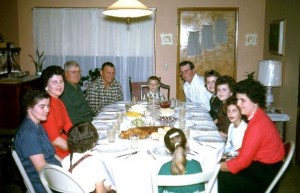 Some of the best holiday memories come from family get-togethers. When I was young we went to each of my grandparents’ homes for a Christmas celebration.

The Schumms usually gathered for an evening meal sometime between Christmas and New Year’s Day. We were all able to sit around their dining room table, which was set with Grandma’s good china. Grandma and Grandpa had an old round oak table and they put all the leaves in it for the Christmas dinner. About thirteen of us were able to sit and eat at the table. Grandma was usually too busy serving to sit and eat with us.

Grandma Schumm fixed most of meal herself, but I think my aunt Amy may have helped her a little. We usually had beef for our holiday meal. Come to think if it, I don’t think Grandpa would eat chicken. Grandma always had corn and she made a delicious pineapple pie. I wish I had that pineapple pie recipe.

After the meal Grandma would always pass around a dish of chocolates. Sometimes she served white wine in pretty little wine glasses on a silver tray. These were festive and rather fancy events. I still have the pair of garnet pierced earrings that Grandma Schumm gave me one year as a Christmas present. 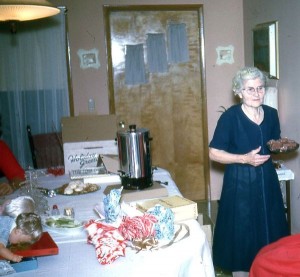 As I recall, the Millers usually got together in the afternoon for their Christmas dinner and gift exchange. There were a lot of people in that little house. There was no way we could all sit at one table there. There were card tables set up in just about every room. I remember that Grandma Miller often gave us younger kids the BIG box of 64 Crayola Crayons and a coloring book. I always looked forward to getting that new box of crayons. It looks like I got a story book in the photo below. 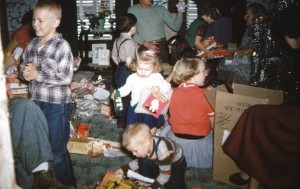 I was too young to remember sitting on scary Santa’s lap at my first Miller Christmas. I have been told that was the day I fell and hit my head on the corner of the sofa and had to get several stitches. I still have the scar on my forehead. No wonder I was crying. I probably had one major headache. 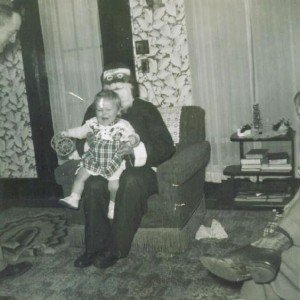 Looking at those old photos, it appears that Santa was very good to both families. 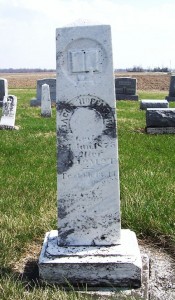 The Family Register section of Zion’s old church records gives quite a bit of information about Jacob Hoffmann and his family:

Caroline died 18 July 1912 and she is also buried in row 6 of Zion’s cemetery. Ferdinand married Barbara Schott in 1867 at Zion. Barbara was the daughter of Michael and Catharine Schott.

There is also information about the mother of Jacob’s wife Caroline in Zion’s Family Register: Margaretha Hoffmann was born 20 November 1796 in Bibingen, Rhein-Prussia. She was baptized and confirmed there.  She married Jakob Hoffman in the year 1820. They had 9 children, 5 of them dead and 4 living at the time this was writing on 27 April 1863. In 1849 she and her husband Jakob immigrated to America and settled in Mercer County, Ohio. Jakob died 30 March 1863.

In 1860 both Hoffmann families were living next door to each other at Skeels Cross Road in Liberty Township, Mercer County, Ohio. Skeels Cross Road is about 4 miles south of Chatt.  [1860 US census, Liberty, Mercer, Ohio; Roll M653_1009:358] 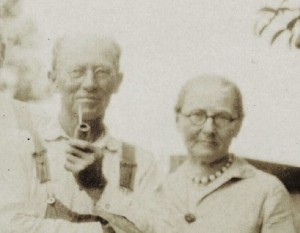 Last Friday’s blog ended with the probing question, who were the two grand-nieces that were enumerated with Jacob and Regina (Gross) Rueck in the 1900 census.

Yes, it is confusing. There were two married couples named Jacob and Regina Rueck. There was Jacob Sr and his nephew Jacob and there was Regina (Gross) Rueck and her daughter Regina (Rueck) Rueck.

Back to the grand-nieces. The 1900 census tells us when and where they were born. Rosa was born in Indiana in March 1884 and Emma was born in Oregon in May 1886. This gives us a good idea of when Jacob [the nephew] moved to Oregon. He would have moved some time between 1884 and 1886. Jacob [the uncle] and his family moved to Oregon about the same time, most likely in 1884. We know that families often traveled and moved together.

The following letter was written to my great-aunt Clara (Miller) Reef in 1944 from her aunt Regina (Rueck) Rueck. Regina was Christine (Rueck) Miller’s sister. Christine was Clara’s mother and she lived with Clara for quite a few years before she passed away.

At last I find a little time to write a few lines, but it is rather a sad letter for Uncle George Rueck passed away last Sat. morning. His heart has been giving him more trouble the last 5 or 6 months. The Dr. told Rose a month ago that he was in the last stage of his sickness, but he was up and around until the last 4 days.

I am glad to say the last few months he read his Bible dayly [sic]. Our Minister held the funeral services. I know we will always miss him when we go to Wecoma. Sister Katie could not go with us. Her leg is bothering so much lately. It is hard for her to get around.

How is Mother? I sure hope the warm weather will make her feel better and how are you feeling? Margaret and Christine both had the stomach fluh [sic]. I stayed with Christine a few days, for I had to go to the Dr. anyway. Then Margaret took sick so I had to hurry home. Of course garden and housecleaning had to wait but we have our garden pretty clean now. It is growing nice. The weather is nice and warm. The first cutting of the alfalfa hay is all in. They are starting on the canary Peas. This is such a slow job. The vines can’t handle them fast enough. The trucks are lined up sometimes for 2 or 3 hours, night and day work. There is not much news of the relatives. All are pretty well except for minor ailments. How are all of the folks in Ohio? I will try and write to Maggie and Carline soon too. So will close with love to all. 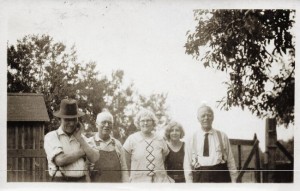 Some others mentioned in the letter: Rose was Uncle George’s daughter; sister Katie was Regina’s sister; Margaret and Christine were Regina’s daughters; Maggie and Carline were Christine (Rueck) Miller’s daughters.

Regina wrote a lot of letters to her sister Christine over the years. She wrote to Christine in German and to Clara in English. Unfortunately I can only read the English letters. 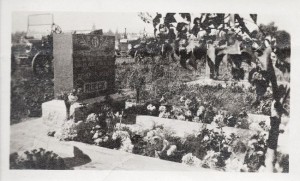 I am not sure when this tombstone photo was taken. You can tell it is old by looking at the vehicles in the background. This is the only photograph that I have of Jacob and Regina’s tombstone and it came from my great-aunt Clara (Miller) Reef. Clara was Jacob and Regina’s granddaughter and was the youngest child of Jacob and Christine (Rueck) Miller. Christine lived with Clara for several years before she died. 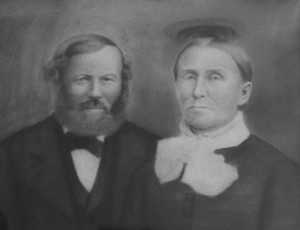 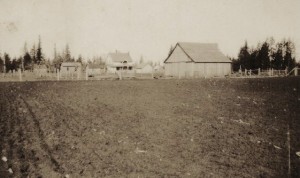 The story of the Jacob and Regina (Gross) Rueck family continues in Oregon. Jacob Rueck Sr. sold his farm in Van Wert County in 1884 and most of the family moved to Oregon.

Family members that moved to Oregon: Jacob and Regina, Johann George, Jacob Jr., Catherine “Katie”, David, Regina, and Carl. Fred moved on to Kansas and changed the spelling of his surname to Ruck. Christine stayed in Ohio. 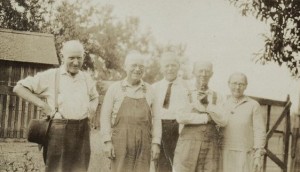 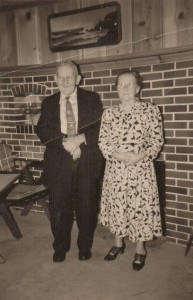 Where is Clackamas County, Oregon, located and why did the Ruecks move there? I found some information about the area on the Clackamas County website. The county is in north central Oregon and is one of the counties that make up the Portland metropolitan area. The county has a lot of timberland and includes Mt. Hood and the Mt. Hood National Forest. Barlow is the smallest town in the county. The town of Canby is nearby and letters sent to Christine years ago were postmarked Canby. Most of Clackamas County is rural and some of Oregon’s richest farmland is in the area surrounding Canby.

Between 1883 and 1888 three railroads were constructed in Oregon which created a trade and a population boom. Many immigrants moved to Oregon at the end of the 19th century, period of Oregon’s industrial expansion. Many Germans sought the urban jobs but apparently the Ruecks were more interested in farming.

Who were the grand nieces living with Jacob Sr.? Check in next week to find out.


Greetings from the Chattanooga, Ohio, area. Yes, Ohio has its very own Chattanooga, aka Chatt, a small village in west-central Ohio, near the Indiana border. I have been doing family history research for over 20 years and am a Board-Certified genealogist, certified by the Board for Certification of Genealogists®. My main genealogical interests are family research, cemetery research, and historical and genealogical research of the Chatt area, with a focus on two area Lutheran Churches, both named Zion Lutheran, one in Chatt and the other in Schumm, Ohio. Family names I am researching include Miller, Schumm, Brewster, Rueck, Reid, Headington, Huey, Bryan, Whiteman, Schinnerer, Scaer, Breuninger, Bennett, and a few others. I belong to several lineage societies, including the Daughters of the American Revolution, U.S. Daughters of 1812, First Families of Ohio, and First Families of Mercer and Van Wert Counties. I am also a retired dental hygienist and our church organist. I hope you enjoy Karen's Chatt.


The words Certified Genealogist are a registered certification mark of the Board for Certification of Genealogists®, used under license by board certificants after periodic evaluation. The board name is registered in the U.S. Patent & Trademark Office.